Back to all posts

The Hollow Gets Great Review from The Aquarian!

Wednesday is once again upon us, my favorite day of the week for so many reasons. The work week is half done, and naturally, I get to chat local music with all of you. What could be better? Thanks for all of your constant support kicking off the New Year right with some awesome talent. Just a friendly reminder, if you are in a band or have some music you’d like me to check out, please don’t hesitate to send your press materials my way at maria@theaquarian.com. That being said, it’s about that time to put another act into the spotlight.

This week, I am going to talk about a modern rock band hailing out of Morris County, New Jersey, whom I recently saw on the big stage. Which big stage, you ask? Well, they opened up for Badfish: The Ultimate Sublime Tribute at Starland Ballroom on Saturday, Jan. 3, along with some of my other local favorites including My Life On Film and Political Party Crashers. They left me with a lasting impression, wanting to learn as much as I could about them. So as you will see, I am still new to their fanbase, however, I think I can still justify bringing them to your attention. They go by the name of The Hollow. You may or may not have heard of them, but by the end of this article, I can almost guarantee you will not be forgetting them. 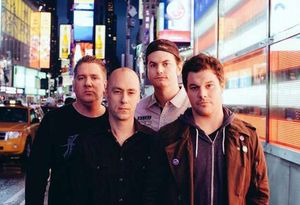 The Hollow consists of members James Vilade, Brian Wilson, Jim Goodwin, and Kevin Barry. They’ve had a ton of press, done some radio stuff, and even worked with some of the biggest concert companies in the country. Now, when describing their “modern rock” sound, this could mean many things. I think you need to hear their style in order to interpret their sound how you want. What’s the impression it left on me? Well, I will try to break it down as best as I can. Ever hear a band that has such a solid single that you know it belongs on mainstream active rock radio, yet, you don’t want it to be, for they are too original and don’t sound like everything else that’s out there? That’s the best way to put a description on it.

One single in particular that I am referring to is a track called “Ms. Behavior." It’s super catchy, and emphasizes not only their vocal talent, but their sound as a whole. It has that “it” factor, without sounding too overproduced. I really enjoy this track. I decided to then check out some more tunes, including a song called “Let It Burn," which has a completely different sound. This is their “anthemic” track, if you will, that could have fans singing along with no problem. I found myself learning the words very quickly, as I wanted nothing more than to be able to blast it in my car and sing along. These are just two songs that I have on my radar, but all of their tracks are listen-worthy, so be sure to check them out.

If I had to compare their sound to another band, I am not sure that I could. Not that one has to be compared; however, bands tend to list other acts that they may “sound like” or artists that are “similar” in sound, just to give you a better idea. They combine various elements of acts, yet their style is all their own. I highly suggest you pick up their self-titled record, and give it a chance for yourself. It’s enjoyable from beginning to end, with a solid amount of filler, not making you want to skip the tracks. That is a quality that is hard to find these days, because for the most part, we live in a singles world. What I mean by this is, sometimes artists shouldn’t even bother releasing an entire album, because the single tends to be the only “good” song. Call me crazy, but that’s my personal opinion, agree to disagree. It is compacted with solid rhythm sections, extremely talented vocal range, heavy guitar riffs, and so much more. I am confident you will be sold on this band after hearing not only their album, but their live set.

You can learn more about The Hollow over at their Facebook page at facebook.com/TheHollowBand. They also have an official website at TheHollowBand.com. Over there you can check out their new music, find out tour dates, and just show them some love, encouraging their dreams. I look forward to seeing what the future has in store for this act, as they’ve got the talent, the look, and what seems to be a nice following. I am lucky to be able to discover such natural, fresh talent in this area, for we surely live around an artistic bunch of people.

I will be back next week, same time, same column, with some more talent to beef up your playlist. In the meantime, keep on sending in those submissions, and I will continue to support you, one act at a time!